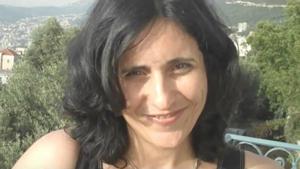 Laila Shereen Sakr is Assistant Professor of Film and Media Studies and Faculty Affiliate in the Feminist Studies Department at University of California, Santa Barbara. At UCSB, she has co-founded Wireframe, a new digital media studio that supports critical game design, data visualization, VR/augmented realities, digital arts and activism. She is known as the creator of the data-body, VJ Um Amel, and the R-Shief software system. Her creative research uses computer analytics, visualization, and immersive worldbuilding techniques to map how participation in social media has influenced the formation of a virtual body politic. Shereen Sakr has shown in solo and group exhibitions and performances at galleries and museums including the San Francisco MoMA, National Gallery of Art in Jordan, Camera Austria, Cultura Digital in Brazil, DC Fridge Art Gallery, 100 Copies in Egypt, among other venues. Her journal articles appear in Middle East Critique, Cinema Journal Teaching Dossier, Networking Knowledge: Journal of the Media, Communication, and Cultural Studies, Parson’s Journal for Information Mapping, Thoughtmesh: Critical Code Journal, and Feminist Debates in Digital Humanities (forthcoming). Over the last two decades, she has been a leading voice in the open source movement, in particular for Arabic localization. She is Co-Editor for the open access journal: Media Theory, and also for After Video published by Open Humanities Press. In addition, she is Research Collaborator in the Global Media Technologies & Cultures Lab at MIT. Professor Shereen Sakr holds an M.F.A. in Digital Arts and New Media from University of California, Santa Cruz, an M.A. in Arab Studies from Georgetown University, and a PhD in Media Arts + Practice from the University of Southern California. Reviews of her work appear in The Wall Street Journal, Science, The Chronicle of Higher Education, Fast Company, The Huffington Post, The Guardian, Voice of America, The Monocle, Art Territories, Digital Media and Learning, Egypt Independent, Mada Masr, Jadaliyya, and The Creators Project.

She teaches a Middle East Media class where she concentrates on digital and online media platforms across geographic boundaries and in virtual worlds. Some of her research on social media has included close analysis of the Green revolution in Iran and the use of Twitter around elections.